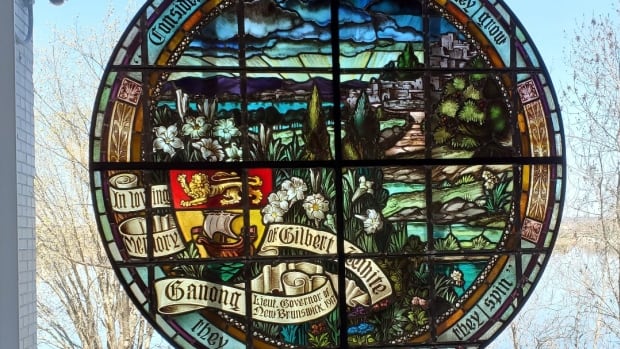 The Beaverbrook Art Gallery has acquired its first stained glass window and Director of Collections, John Leroux, says it is filled with New Brunswick historical significance and the beauty of craftsmanship.

“It’s a beautiful piece and we’re so lucky to have it,” Leroux said.

The round glass, two meters in diameter, comes from a Baptist church in St. Stephen that was demolished a few years ago and is dedicated to the confectionery co-founder and former Lieutenant Governor of New Brunswick. Gilbert White Ganong, who had played the role less than a year before his death in 1917.

It shows a field of lilies — which are generally considered to represent sympathy or rejuvenation of the soul, Leroux noted — surrounding the New Brunswick coat of arms.

John Leroux is back, contemplating the history of New Brunswick through a stained glass window. The 6-foot masterpiece was designed as a church memorial to former Lieutenant Governor and St. Stephen native Gilbert White Ganong.

In the background, the sun sets over a city, perhaps meant to resemble Jerusalem.

It has many shades of opalescent blue, green and white stained glass, he said, “similar to what you would see in a Tiffany window”.

“When we go back people to see it, they are just amazed by the quality and the color.”

The glass was installed in front of a large north-facing window in a stairwell in the new gallery wing, overlooking the river. Leroux expects him to be there all the time.

“There’s a beautiful light coming through it all day,” he said.

When you look at it, you can see both the landscape of the artist in the work and the natural landscape of trees and water in the background.

“It’s beautiful,” he said, and a “very fitting” place.

Especially, Leroux said, as Ganong himself would have had a similar view, going back and forth from the provincial legislature across the street.

The gallery is working on a way to illuminate the glass so it can also be enjoyed at night.

This window originally hung behind the altar of Union Street Baptist Church in St. Stephen.

He was installed there in 1919, says Leroux.

He was introduced to the work a few years ago by a friend and renowned restorer and stained glass artist, Ned Bowes of Fredericton.

Bowes worked to restore “most of the stained glass in New Brunswick,” Leroux said, and he described the work as “one of the greatest stained glass windows he had ever seen in the province.”

Bowes said he came across the piece while restoring about a dozen other windows that were being moved to a new church nearby.

It hung about six meters (20 feet) above the altar, he said, but no light shone through it.

The glass had been completely covered on one side, Bowes said, and partially covered on the other by a large screen, when an addition was built on the church some 50 years ago.

When he went up to check it out, he discovered that it was dedicated to Ganong and became enthusiastic about its historical significance.

Since the church had no room for the play in its new building, he was allowed to find a new home for it.

“The hunt was on to find a meaningful place to come out of obscurity,” he said.

Bowes said he was “very happy” that the glass is now in the Beaverbrook Gallery where “everyone” can enjoy it.

One of the things Bowes loves about the window is the “beautiful message” it conveys.

“Consider the lilies of the field,” he said, quoting a Bible verse, “how they grow, they neither toil nor spin.”

Leroux said the lilies are one of the features that first struck him when he traveled to St. Stephen to verify what Bowes had found.

The window was in four pie-shaped pieces, he recalls.

“He held one up to the light,” said Leroux, “and I saw those lovely lilies go by.”

He was also caught with the massive New Brunswick Shield in another quadrant.

“You rarely see heraldry in things like this in church windows,” he said, but it was done because of Ganong’s involvement in politics.

“Usually in church windows you see figures, you see if it’s Christ or other saints or people doing things of a sanctified nature.”

This one has no one at all.

“The other significant thing” about this window, Leroux said, is that the glass was made at the Robert McCausland Stained Glass Studio in Toronto, “one of the most important stained glass artists in Canadian history.” .

They have been in business for 165 years, he said, and are the oldest stained glass workshop in North America.

“And it’s a 100-year-old window. So just preserving a beautiful piece of history and art, it’s of Canadian significance. It’s just a good thing.”

Theaster Gates, the first non-architect to be chosen for the Serpentine Pavilion Commission, unveils the community-focused ‘Black Chapel’