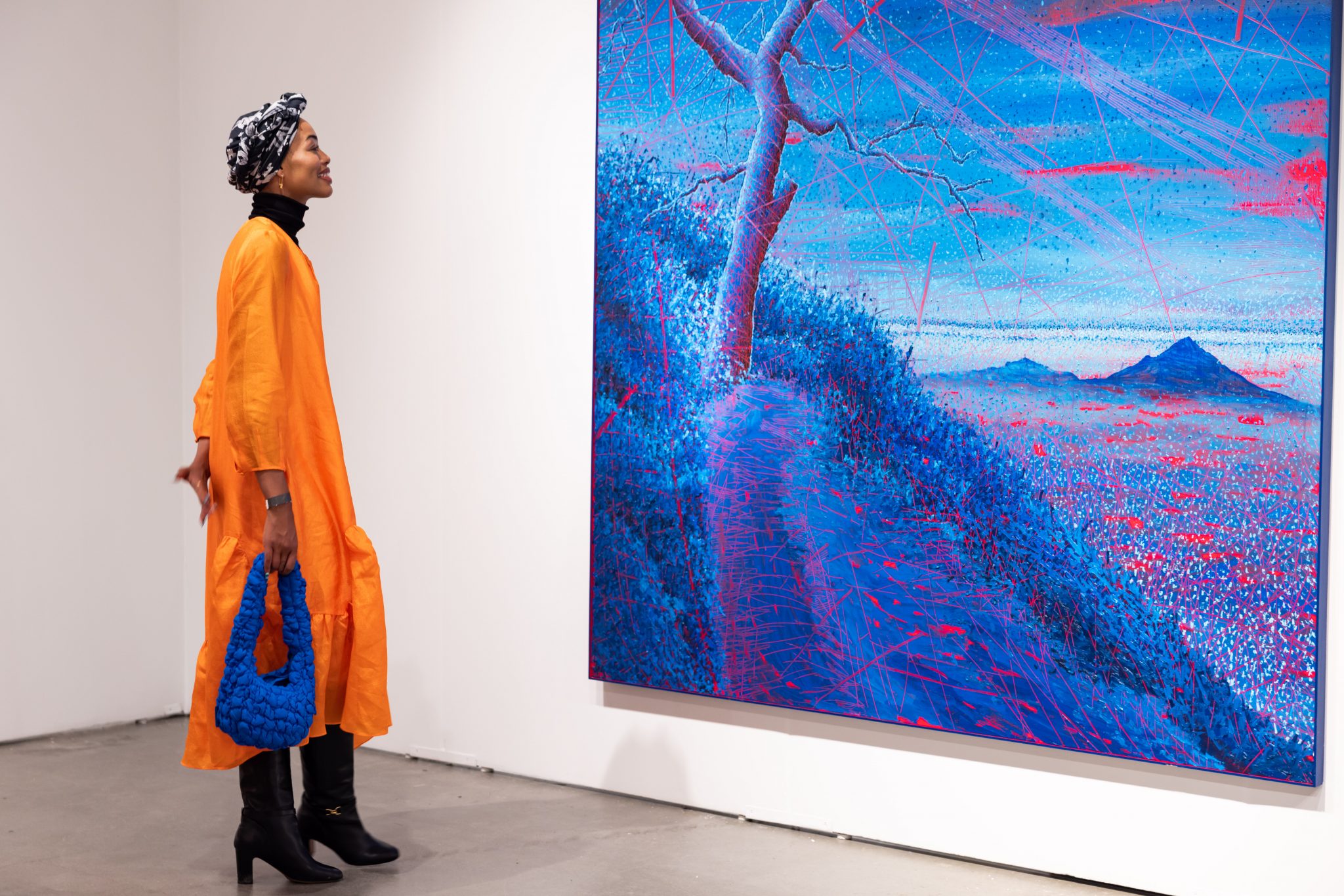 In 2019, before “The Day the Earth Stood Still”, I said to myself: this is the last year that I write about the EXPO. I’ve seen every iteration since it reappeared at Navy Pier and wrote about all but one. They were great, but also, pretty much the same. Same layout, same galleries – many works even look alike. Also, EXPO always hurts my eyes, which usually leads to headaches, culminating in dizziness and, for a record year, a race to the nearest bathroom.

Unsurprisingly, the culprit for this year’s headaches and mild nausea was more likely the previous night’s drinking than excess art, as myself and what seemed to be every gallerists of “Friday at 11 a.m. hangover”. While most years I set myself a goal, a theme, no, a quest that guides and organizes my circuitous stays around the drywall palisades of Festival Hall, this year I just wanted works that could appease a split skull.

With the visual equivalent of a javelin missile fired from the shoulder of a Ukrainian hero off the table, I instead went for calm hues, placid scenes and soft textures (check out the funky fibers of Ogla by Amaral at Richard Saltoun #229). So, armed with a bottle of ibuprofen, a Propel of Gatorade, and sixteen ounces of gas station coffee, I decided to make my way through the ninth and greatest edition of EXPO.

For many of us, respite from the pandemic has been found in the sanctuary of city parks and on the shores of Lake Michigan. Being surrounded by nature always knocked the old blood pressure down a few notches anyway and there are some outstanding examples of scenery scattered throughout the fair. Summer Wheat’s cool blue “Love Birds (Left)” at Sulamit Nazarine (#235) is haunting, but it’s the work of Chicago-based painter Soumya Netrabile at Andrew Rafacz (#351) that I kept coming back to.

Netrabile’s feature takes the viewer through the looking glass into a beautiful, lavishly brushed display of immersive landscapes. With painterly touches that echo Monet to Gorki, we see the man not as the master of his world, but as an integral part of it. More conceptually pleasing than his solo show at Andrew Rafacz last fall, these works still feature the verdant greens and warm oranges, but are absent from the sinister creatures lurking among the foliage. The result is energizing and restorative, without being overwhelming.

A few meters from the concrete walkway of Aisle 300 stands Martin Projects (#374) of Cape Town with a solo presentation of acrylic works by Sudanese artist Salah Elmur, based in Cairo. The formal vernacular of Elmur has its origins in the European modernism of Chirico, Braque and above all Picasso. BTW, take a look at this lovely Picasso drawing at the Smith Davidson Gallery (#261) – I actually own a book with this drawing in it!

Anchored by the majestic ‘Greenish Black Velvet and Two Trumpets’, Elmur’s work is as comforting as a stroll through the autumnal parks of Netrabile, yet there is emotion in his mysterious figures that speak of lost love and unfulfilled dreams. Packed with alienation and dislocation, the weight of Elmur’s paintings is carried only by the faces of his subjects and the few solitary objects they hold.

If these two utterly exceptional displays aren’t the aesthetic equivalent of the proverbial dog’s hair, I don’t know what is. Of course, EXPO 2022 is still full of white bread abstractions. As psychically soothing as a TV fireplace at Christmas and as easy to digest as a bowl of Cheerios, and by the time I passed the fiftieth oversized color chart, I was about to crave a beer. A sure sign that the hangover has died down and another EXPO was in the history books. Now, about this pandemic… (Alan Pocaro)

Echoes of Kashmir in the paintings of the artist UT: The Tribune India