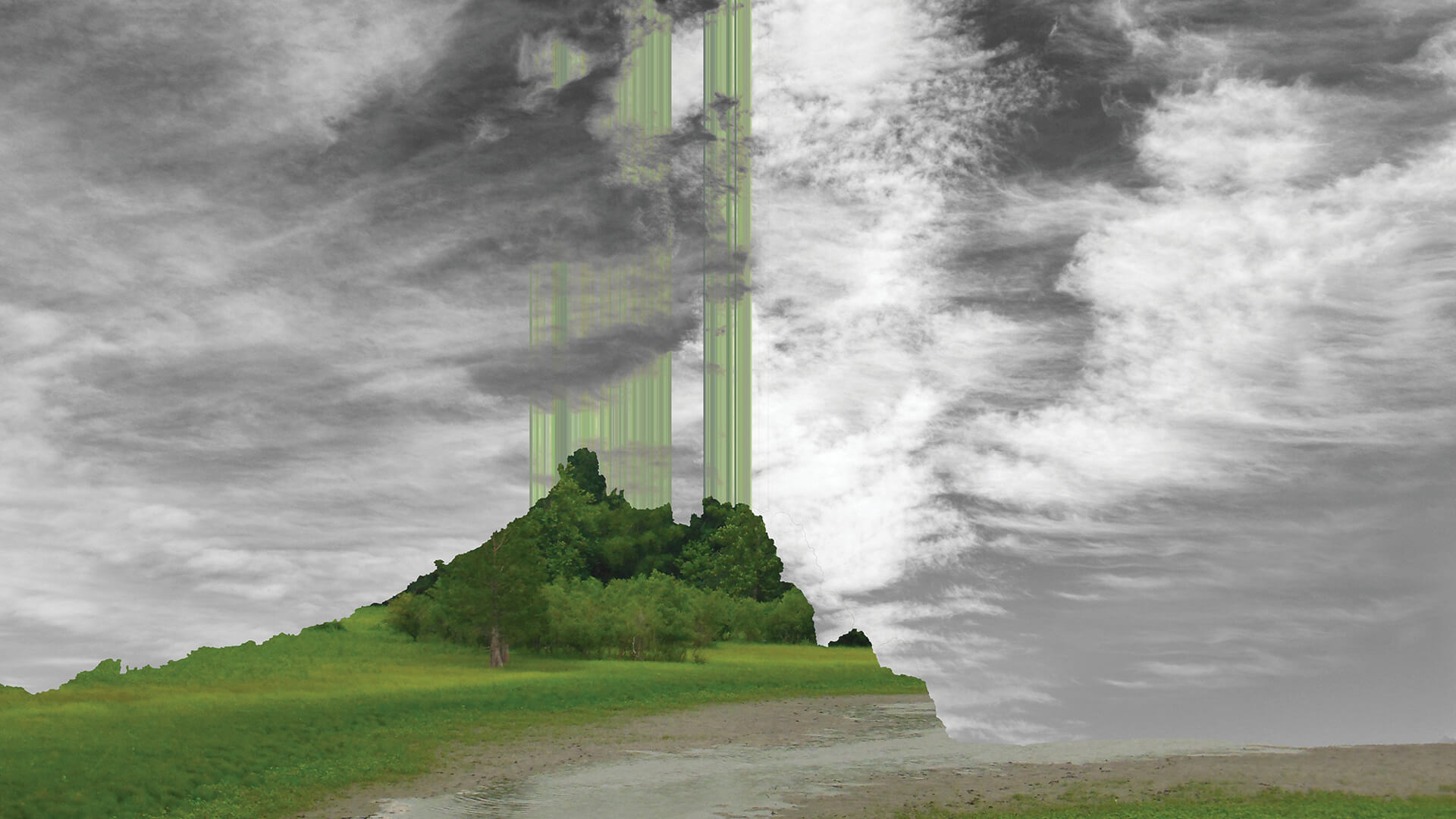 A chunk of rock perched on top of a mountain, the vertical lines of light filtering across the vast green field, the rose-tinted sky against a boulder in desolate terrain. Here are some excerpts from the realm of photographs created by American image maker Ellen Jantzen. Forging a relationship between photography, prints and collage art, Jantzen refrains from using the digital advancement of photography as a means of representing the many realities of nature. Natural and man-made elements come together to manipulate the unique order of nature in an effort to allow viewers to re-engage with their surroundings in a new light.

Jantzen has always been intrigued by the formation and evolution of mountains. The beauty of high mountains is rooted in their rich history of deposits, which fascinated the image maker. Interestingly, made of the same materials and minerals, rocks, stones and mountains still differ in size. Scale is a key element in Jantzen’s works. The series Unexpected geology is the embodiment of his fascination with mountains and rocks and his interest in playing with visual proportions. In an interview with STIR, Jantzen says, “Ratio, proportion, relative size, all play a role in the magnitude of structures. There is aesthetic magic to scale. I approach this work both as a window through which I observe my new surroundings (recording what I see) and as a mirror where I bring my sensitivity, reflecting my inner state of being. I use layering and blending modes to merge the observed environment with my internal intuition. Here I digitally place stones in my photographs of mountainous landscapes while obscuring scale references.

Before officially starting to create images, Jantzen studied graphic arts and worked as a senior project designer at Mattel Toy Company. With technological advancements in all walks of life, including improvements in digital cameras, Jantzen saw a perfect way to give wings to his creative desire. This allowed her to create what she calls “photomontages”. To provide insight into the art of making images, the graphic designer takes us through the many stages she goes through before presenting her work to viewers. “Normally, I have a concept in mind and I shoot to meet my needs. I take quite a few shots to have more information to draw on when creating and to leave room for surprising captures. Back in front of my computer, I start my work by sorting through my images and selecting the ones that look most promising to me,” says Jantzen.

More often than not, the task of artists sitting at a desk and working digitally comes down to buttons. Jantzen says, “That’s far from the truth. I would venture to say that I spend as much (and maybe more) time working on my images as someone who develops them in a darkroom. As I work, I use various Photoshop tools to draw, cut, and select. I use a Wacom stylus (pen), exclusively; work a bit like a painter. I have dozens of layers that are meticulously created and blended to form my final image. I always save two files, one where all the layers are flattened into one photo for printing and a second file where the layers are separated. It gives me the opportunity to revisit an image, thus upsetting the notion of decisive moment.

As someone born in Missouri, USA, having spent considerable time in Illinois and now living in New Mexico, Jantzen is familiar with the experience of resettlement. She mentions, “Where a person is born greatly influences who they are, but as they move, new landscapes wait to reshape their very being.” During times of travel restrictions to prevent the spread of COVID-19, Jantzen had time on her hands to mix photographs from her years in the Midwest (Missouri and Illinois) with current photos she had taken while living in the New Mexico, giving rise to the series Middle + West; Dream. Jantzen says, “The landscape seems to be moving, as if someone is passing quickly, but the clouds seem heavy and still. There is so much life that passes us by these days while our heads are in the clouds. Are we moving or standing still as the abstract earth meets the real sky? We are reshaped by our circumstances. We are becoming, in essence, a mixture of all the ancient homelands with the present.

The interplay of ratios and proportions is not so rare among image creators. What makes Jantzen’s photomontages so unique is the invitation to let viewers become part of a poetic communion with the multidimensional landscape.