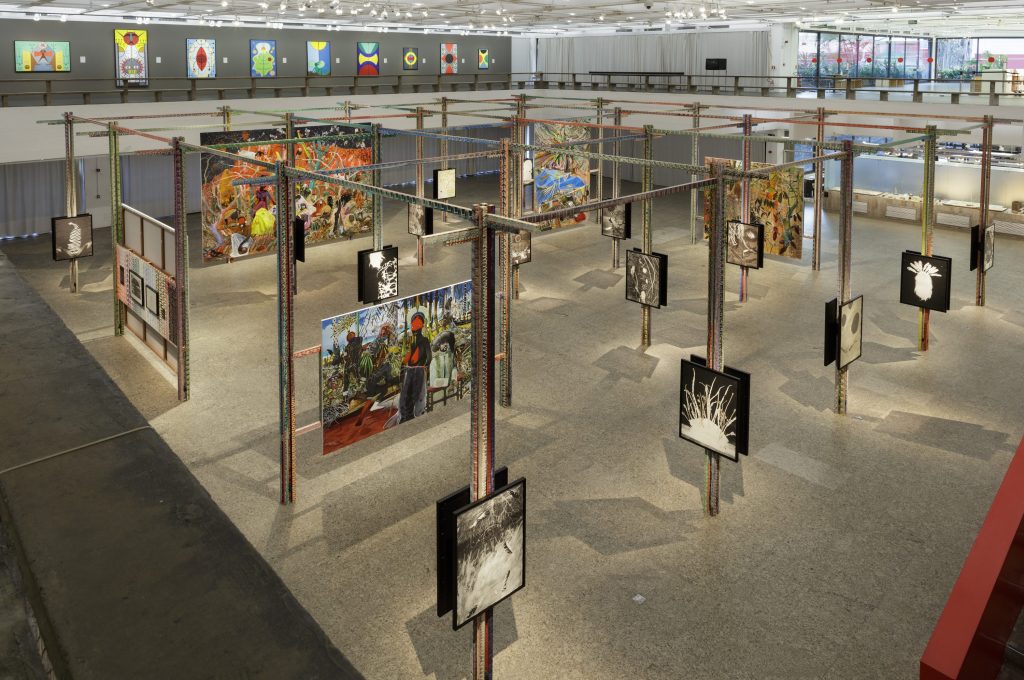 For decades, Brazil’s Amazon rainforest has been seen by some as a symbol of pristine nature, teeming not only with verdant flora and vibrantly colored fauna, but also natives who can withstand harsh weather. incursion of modernity. Only recently has this image of the Amazon begun to unravel as the stress of destructive fires, social movements and the Bolsonaro regime reveal a history of abuse. In his exhibition “The Same Story is Never the Same” at the Museu de Arte de São Paulo (MASP), Luiz Zerbini aims to give us a view of perspectives across Brazil that have long been shrouded in colonial histories.

Zerbini had long focused on creating landscapes when MASP artistic director Adriano Pedrosa commissioned Zerbini in 2014 to paint a reinterpretation of one of Brazil’s most iconic paintings, A primeira missa no Brasil (The first Mass in Brazil). This work was created in 1861 by Victor Meirelles at the request of the last emperor of Brazil, Dom Pedro II.

“It’s a very typical colonial image that we learn at school,” explained Guilherme Giufrida, the exhibit’s curator. “Although Zerbini had never worked with the human figure nor with historical narratives, he accepted the challenge.”

The painting shows the forest in chaotic full bloom as native members pull canoes and work. In the middle is a proud woman, whose lower half is mysteriously swallowed up by a fish. In the distance is the newly erected cross which is now barely noticeable. The colonizers did not enter this land and become impressive protagonists, the painting suggests. They were figures on the horizon of importance, trying to survive, adorning themselves with their precious icon.

“Now in schools they reproduce this work of Zerbini as a new image to study, this image of the first contact between two totally different civilizations,” said Giufrida.

A primeira missa inspired Zerbini to continue painting untold stories, and slowly the idea of ​​the exhibit as part of a dedicated series of Brazil-focused exhibits held as part of MASP’s acclaimed “Histórias” series. In Zerbini’s recent paintings, he has created new imagery to represent historical events like the 1993 Haximu massacre, Brazil’s first recognized genocide, and the 1895 Canudos War in which a diverse commune was wiped out. by the Republic.

Both events are of central importance to Brazilian history, but they lack accompanying visual language, such as paintings or photographs, that offer alternative perspectives of the events that have been largely documented by the powers of the state.

“Since the Portuguese arrived here and discovered the abundance of gold and silver, there have been conflicts,” Giufrida said. Today, illegal miners settle in the recesses of the forest to extract gold. This is how the miners came into deadly contact with the Haximu people who lived there.

Articles about the Haximu massacre are usually only accompanied by images of natives or an image of the forest. by Zerbini Haximu Massacre (2020) pulls no such punches. There are bodies strewn across the fertile forest floor, though the individual shapes are not entirely comprehensible. Yet one figure is clearly depicted, a lone man with a machete stands above the bodies as gold colors the surrounding waters.

Brazil’s natural abundance is in constant contradiction to the violence that surrounds it. This perversity is present in all of Zerbini’s work: a loving reflection on the botanical beauty of Brazilian plantations surrounded by ghostly slave figures, as in Useless landscaping (Useless Landscape), 2020, or a plant of mythical proportions amid the oily waters of a guerrilla gold mining site in Rio das Mortes (The River of Deaths), 2021. Interspersed throughout the exhibition are his prints, made from plants he picked around his home.

As much as Zerbini makes explicit stories of violence, he deliberately obscures them. Out of respect for the bodies of the dead and slaves, they are often hidden or abstracted in some way. In his interpretation of the Canudos war, for example, he gives us a vision of the community still whole, still full of potential.

The exhibition is comprehensive in that it includes not only Zerbini’s works, but also his inspirations, including abstract dioramas full of things he references in his paintings, like a leaf he loved or a knife. ordinary. Still A primeira missa no Brasil himself is noticeably absent here. “He said it was too violent,” Giufrida explained.

Show Your Work – The Brooklyn Rail