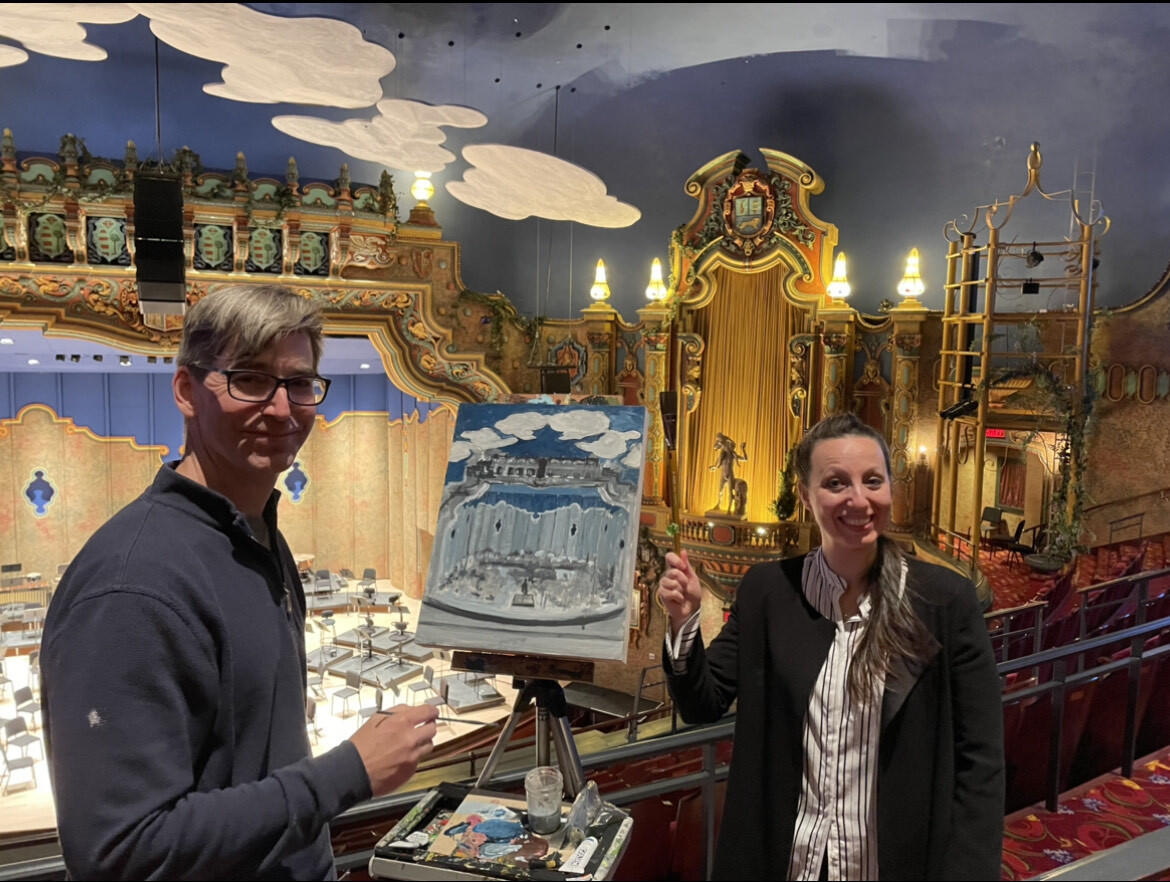 Artist and Virginia Commonwealth University alum Matt Lively spends as many days as possible capturing moments from the Richmond Symphony Orchestra rehearsals on canvas. Each tableau is completed by the time the members of the symphony complete their two-hour rehearsal.

Lively started the project in March and has completed eight paintings so far – most are 10 inches by 10 inches. He hopes to continue painting all summer.

“Our musicians are impressed by his presence, and likewise Matt is impressed by all musicians,” said Amy Buhrman, associate director of marketing and sales for the symphony. “Musicians love it. When I introduced Matt, he received applause.

The symphony originally asked Lively to paint a mural, but he suggested doing something that would tie the visual arts to the symphony, coming up with the idea of ​​painting while the symphony was rehearsing.

“I thought we could share the paintings and the process with social media. People could in turn share it and talk about it, ”said Lively, a graduate of the VCU School of the Arts in 1993 with a bachelor’s degree in sculpture. “I’m thinking of developing the idea and doing something like bigger studio paintings and also some sculpture.”

Lively normally paints objects, landscapes and concepts, not people. So painting members of the symphony orchestra was a different experience, he said.

A new point of view

He has learned a lot about symphonic music since attending rehearsals.

“I always thought the conductor was waving a magic wand, but I found it to be a collaborative process,” he said. “I’m amazed that the conductor could tell which of the seven cellos was off based on the speed or the sound of the wood. The more I attended rehearsals, the more I could hear some of that. I’m also starting to learn some of the language, how they refer to notes and instruments. It’s like learning a new language. When you are exposed to it, you recover it little by little.

Watching rehearsals and seeing the musicians in street clothes rather than their usual black-and-white stage attire gave Lively a different insight, he said.

“It’s the first time I’ve seen them as real people, people you might see cutting the grass, being your neighbor,” he said. “I also saw the work that goes into rehearsals and how important that is.”

Lively plans to hold a show in October and auction the originals of her painting project to raise money for the Richmond Symphony Orchestra.

“Matt wants to give us some of the profits,” Buhrman said. “What I love about this relationship is the fact that artists have really suffered during COVID and this project is artist supporting artist with no claims to reach the peak of this relationship.”

From ‘Star Wars’ to saving the environment

Lively was 7 years old when he knew he wanted to be an artist. He made the decision after seeing “Star Wars” in theaters and not being able to understand the intricacies of art and film.

“I started drawing a lot because I was thinking about this (man-made) visual stuff. At first, I started drawing things from the movie that I remembered. My mom used to get me books on the film and art, some written by artists Frank Frazetta and Francis Bacon, both artists are still an influence on me.

“I thought it would be a path to cinema. So I decided to get good at painting,” he said.

“The more I painted and made things, the more opportunities I found.”

Lively continued with art throughout her years at Midlothian High School in Chesterfield County.

“My high school art teacher, Buddy Terrell, was a huge influence. If it wasn’t for him, I couldn’t have gotten into VCU,” Lively said. “I went to VCU because from art school. It was the only place I wanted to go. »

Lively wanted to learn more about sculpture, specifically the tools involved in the art form.

“All of my professors at VCU were mentors to me, especially retired School of the Arts professors emeritus Elizabeth King and Lester Van Winkle. I always talk to both of them,” he said. “Being in the sculpture department opened up so many options for me in ways of thinking and materials. I learned about two-dimensional and three-dimensional art as well as digital art.

When Richmond-based sculpting artist Paul DiPasquale spoke in one of Lively’s classes, it was a turning point, Lively said.

“I learned to earn my living as a sculptor. Before, I didn’t understand how I could get out of school and start making gigantic sculptures. He offered hints and tips of the trade to achieve this,” Lively said. “I left school and started making a living as an artist right from the start.”

One of his recent and most unique sculptures was a galvanized rain collection system for Binford Middle School in Richmond. Rainwater falls from the roof through a gutter in troughs resembling white clouds. Rainwater then falls through clouds onto a plant area. Previously, water would fall from the roof and spray onto the sidewalk and into a gutter.

“I made this sculpture with the Alliance for [Chesapeake] Bay and Tim Harper. He gained a reputation not only for the art, but also for helping our environment. This has measurably reduced the amount of pollution flowing into rivers,” he said. “I liked it because it incorporates everything I do and what I wanted to do. From the road, we see facades of clouds. This reminds me of my original idea of ​​painting movie sets.

Subscribe to VCU news at newsletter.vcu.edu and get curated stories, videos, photos, news clips and event listings delivered to your inbox.

More than just a stage: A behind-the-scenes look at the magic of the Alabama Shakespeare Festival

A Norwegian center will present the exhibition “Double Vision” in June