An old painting depicting officials from the Joseon Dynasty (1392-1910) attending a school program at a pavilion called Dokseodang Study has returned to Korea after 490 years. It was purchased by the Cultural Heritage Administration at an auction held in the United States in March. [CULTURAL HERITAGE ADMINISTRATION]

An old painting depicting officials from the Joseon Dynasty (1392-1910) participating in a school program in a pavilion by the Han River near present-day Oksu-dong in Seongdong District, east of Seoul, is returned to his country of origin after 490 years.

The Cultural Heritage Administration (CHA) announced that it was able to bring the painting back with the Korean Overseas Cultural Heritage Foundation at an auction in the United States held in march. The CHA revealed the 16th-century painting to local media on Wednesday at the National Palace Museum of Korea in central Seoul and said a special exhibition on Korean cultural heritages returning from overseas, which will include the painting, will be held at the museum. from July 7 to September 25.

According to CHA, the painting was created to commemorate a gathering of officials who participated in the sagadokseo program during the reign of King Jungjong (r. 1506-1544).

Sagadokseo was a program to train talented young civil servants in the Joseon Dynasty. It provided for a sabbatical allowing civil servants to devote themselves full-time to study rather than to the management of government affairs.

“It is a work of great value and is the oldest among the three surviving examples of 16th-century dokseodang gyehoedo paintings,” said CHA official Lee Seon-hyeok. “In particular, its year of production can be determined by examining the names and titles of the participants. It is a masterpiece that demonstrates the main characteristics of landscape paintings from the early Joseon Dynasty.

The title of the painting, written in Chinese characters across the top of the painting, reads: “dokseodang gyehoedo”. The central part of the painting represents the old district of Dumopo, which is now Oksu-dong. Mount Eungbong is in the center, which still exists today and is visited by many nearby locals.

Dokseodang Study was built in 1517 during the reign of King Jungjong. It housed an institution to promote study and research and was used for the sagadokseo program until it was destroyed during the Imjin War (1592-1598). 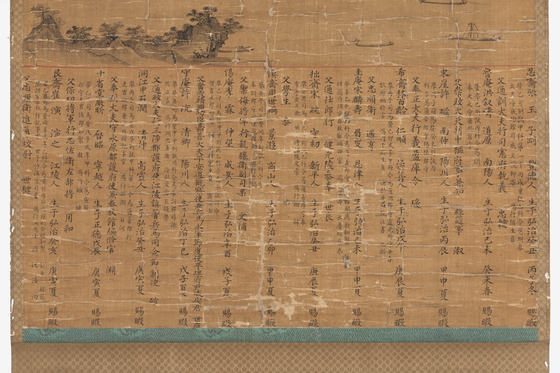 The inscriptions on the lower part of the table specify the names of the 12 participants of the program. [CULTURAL HERITAGE ADMINISTRATION]

The inscriptions on the lower part of the board list the names and coordinates of the 12 participants in the rally.

“The participants were young officials in their twenties and thirties who had participated in the sagadokseo program between 1516 and 1530,” Lee said.

Among the twelve are notable figures such as Ju Se-bung (1495-1554), an official known for his integrity who laid the foundations of Korea’s neo-Confucian academies, called seowon, establishing the Confucian Academy of Baegundong; Song In-su (1499-1547), the author of “Gyuamjip” (Complete Works of Song In-su), revered as a master of neo-Confucianism; and Song Sun (1493-1582), who excelled in poetry and prose and held key government posts for five decades.

“The official titles of the participants recorded on the painting have an additional importance in that they serve as the basis for estimating the period in which the painting was produced,” Lee said.

According to the Annals of King Jungjong, called Jungjong sillok, Song and Heo Hang (1497-1537) were appointed to new government positions in 1531 and 1532, respectively.

“The government positions they held are recorded on the chart, which means we can assume the chart was created in or around 1531,” Lee said. “The painting is very rare in that it is a work of which we can know the period of production, that is to say the beginning of the Joseon dynasty, a period of which few works remain from art, and what is more, as a representative masterpiece of the real landscape paintings of the time.

It is unclear how the painting was taken out of the country, according to the CHA. The painting’s previous owner is said to have been Kiichiro Kanda, the former director of the Kyoto National Museum in Japan. It was sold after his death and ended up in an auction in the United States.