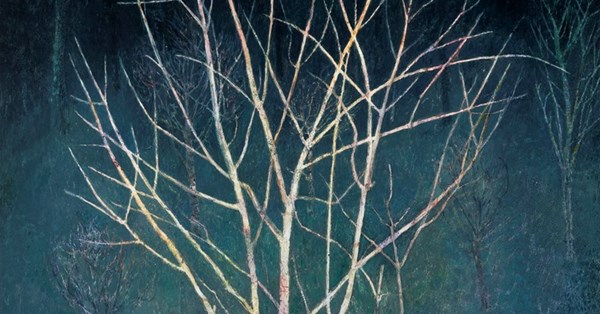 A bold standing tree “between uncertainty and something like eternity”. This line by Scottish poet Christine de Luca, written in response to an early image created by Victoria Crowe, after the double whammy of cancer treatment and confinement, speaks in the space inhabited by “Resonance of Time”.

In this exhibition, Crowe continues his long investigation of the metaphysical landscape and our relationship to nature, real and transmuted.

When the first lockdown began, Crowe was recovering from cancer treatment and unable to paint, while dealing with the impact of his illness. His 2019 retrospective in Edinburgh took place during his treatment and was followed by a lengthy recovery, which straddled the lockdown.

Once she had processed some of what had happened enough to start painting again, her focus shifted to the immediate landscape seen from her window. Several poets had responded to her retrospective, and she picked up on that connection, sharing new images with de Luca, who in their interaction articulated the space she inhabited and then informed the images of “Resonance of Time.” .

They are images of trees as living beings communicating with us – as the Ents do in Tolkien’s mythology – some solitary, others grouped together in landscapes. Viewpoints are either overhead, looking down, like from a window, or up close and personal. Those close together are mostly coral arch maples and flare-shaped burning bushes: symbols of mystery—positioned between uncertainty and eternity—in the dark of night.

These are images that stand on the border between permanence and the ephemeral, capturing the fixed point of the world revolving in moments of twilight, in which the setting sun still blazes in the reflective waters of a still lake, or the snow turns blue at the start of the light. from the moon. The varying lights of dusk create the subtle yet vibrant colors of these landscapes, and the studies of trees with their immersion in this transitional liminal time, which is both now and not yet.

Always in the snow sets Crowe’s trees in stark contrast to the bleached northern sky, their delicate interlacing of bare, wiry branches rendered with acute clarity. language of the night has his glowing lone tree in the foreground of a darkening forest. strange illumination places a bare skein of branches along the leaf veins, finding trees in the leaves and thus reversing their color schemes.

Crowe is widely known for her winter landscapes, which are often painted from memories of walking at dusk. A faint crimson flame on the horizon will often signal the transient moments of twilight, in which it finds dreamy elements and combines them with strong visual memories of the place. Twilight in his works also reflects an inner life, indicating a transitory and contemplative state between beginnings and endings. Shine with a late sun provides an example through its jewel-colored bursts against lengthening shadows and fading light. Crowe says, “To me it’s a positive tribute to a past event and memory – the melancholy is understated.”

Her special form of magic is to transform observations of everyday experience into the surprisingly unknown through symbolic associations with dreaming and memory. She captures fleeting moments in which the natural world appears abstract, whether it’s the luminous silhouettes of winter trees or the stillness of the softened landscapes of snow-covered hills.

Smoke and Mirrorlike with Journey through the twilight, provides evidence (unusual for Crowe) of human activity and presence. The tangible sign of the smoke acts like a column of clouds, while the reflective surface of the water is illuminated by the reds and oranges of the setting sun. The trees in the foreground are lit in blues and greens. Crowe’s color choices create his dreamlike atmosphere, but may also reflect his intense attention to the unusual colors generated by the light of dusk.

The small but exciting denser than light gives us a Samuel Palmer-like moon framed by the encroaching scope of dark forest branches. Whether framing the moon or trying to obliterate its light, it’s a wonderfully bright image illuminating our path in life as well as among the trees. For Crowe, light is everything, creating the contemplation of beauty and guiding our steps through the illumination of paths.

Find your home in the beauty of Wynlakes