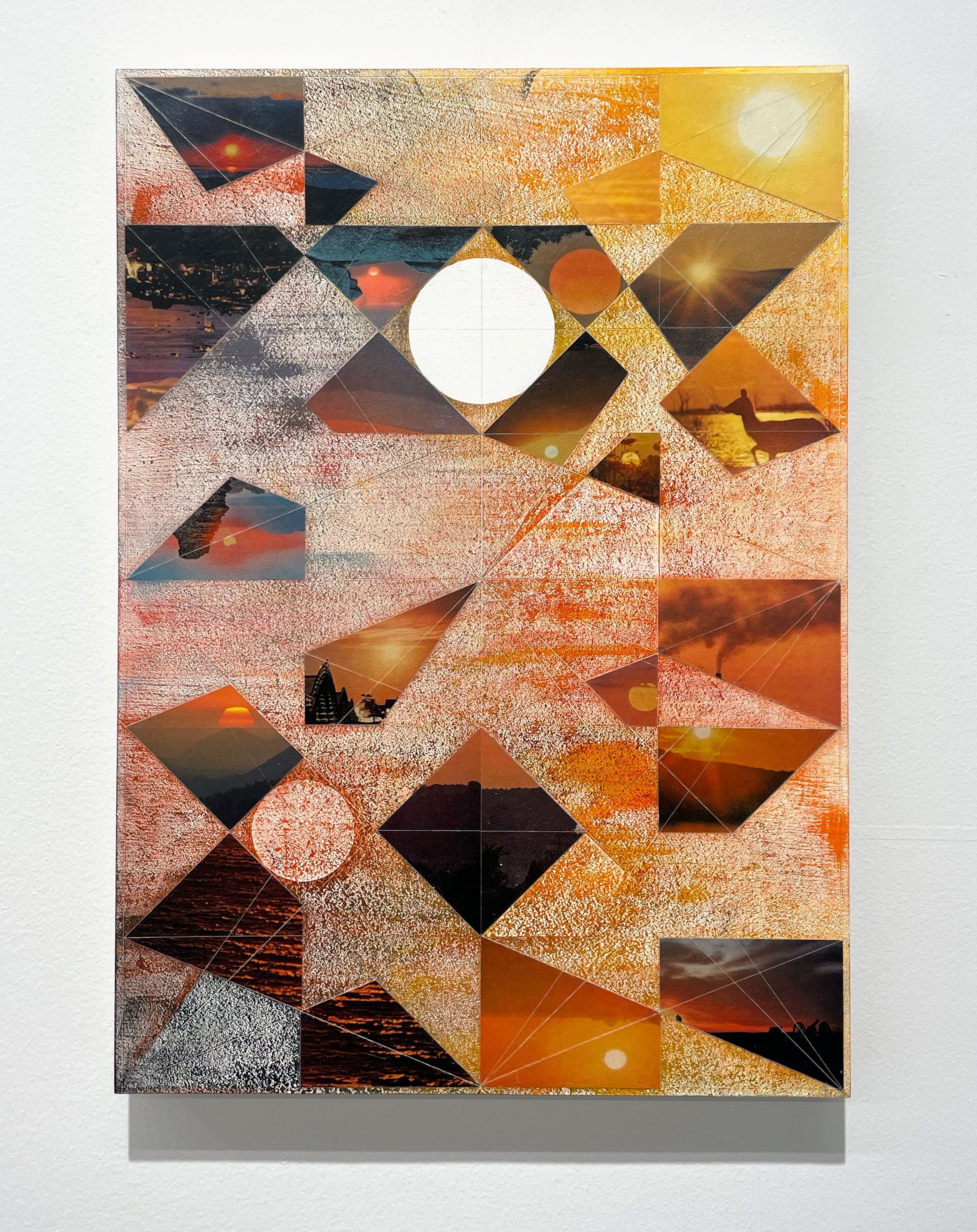 Show Your Work – The Brooklyn Rail

Michael Rado wants you to know how the fabulous works on the walls of his exhibition at Art Cake were made. He wants you to know this so that you can monitor progress and appreciate the choices that organize multiple fields of information into singular compositions. It is a pleasant exercise. Even though all the works are constructed according to the same system, they each offer a unique and unexpected surface that is teeming with photographic details.

The whole work is called “Dynamic Symmetry”, after the mathematical ratio defined by Jay Hambridge. The ratio itself relies on “dynamic rectangles” as a base, and from there lines are added that create intersections of clear and equal proportions. Hambridge used the system to divide landscapes. He buries his lines under his photos. Rado does the opposite. It places the geometric armature just above and the result is that your eye never rests; it follows line to line, stopping intermittently at photographic moments that only occur as fragments of themselves.

The photographs that Rado has carefully pasted into each room come from old National Geographic magazines. There are themes: in one work the images of birds predominate, in another it is the eyes, in another it is the columns or the people pointing. There are eleven of these works, varying in size, and the repetition of the images goes well with the clarity of Rado’s geometric outline. His choice of Nat Geo as source material also has conceptual underpinnings, in that the magazine symbolized a type of access or understanding of the world. By cutting it up and introducing a new system of organization, Rado playfully undermines the grandiosity of vision at play in any project that presupposes order over natural phenomena.

The surface texture of Rado’s work is remarkable. It’s smoother than expected, almost lustrous, but the artist then disrupts that refined flatness with a gestural brushstroke. Frankly, it’s exciting. After all the meticulousness of his process, there comes a point where a bit of freewheeling occurs, and that relaxes the composition. His choice of color is based on the shades of the photographs he has selected, as in Sunrise or Columns (both 2022), where the faded paint almost made me think the photos were leaking. I’ve been taken enough by on black (2022). At first I thought it was because the paint application was particularly good: big shiny caterpillars of paint on top and washed out areas on one edge. But that wasn’t it. This is the artist’s decision not to complete the symmetry. By not following the rigid geometric framework, the artist introduced a tension between what seemed to be under control and what was not. Of course, this is an illusion; Rado is in full control at all times. But the feeling of this division is profound, like visiting a manicured garden at the edge of an old forest.

One detail I didn’t recognize: Rado’s lines are etched into the surfaces of his works. This produces an interesting effect because it is a line defined by what it dissects. Unlike collage elements or adding paint, Rado does not add another material but makes extremely precise incisions that both outline the areas in which the image and paint will occur and cut through those same areas. Therefore, Rado’s blade begins to appear as a primary metaphor in this body of work as it organizes and then reorganizes the topography of the paintings.

Rado created these paintings during his residency at Art Cake. His studio adjoins the showroom. Occasionally the doors are opened and visitors can peek into the work in progress, giving the experience of visiting Art Cake a creative energy and community feel. There is a great warmth in the place, and this surely contributes to the inspiration of the artists who work there.

“I don’t know what prodigy means. And I don’t care’