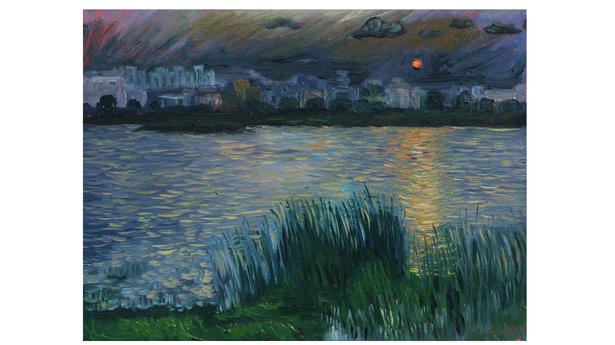 Every morning, before the golden hour strikes, Puviyarasu Kannadasan sets off on his trusty bicycle with his companions: a canvas, an easel, a black pen and some paints. When he sees a spectacle that torments him, he stops, supports the easel and begins his work.

Brandishing a black pen, he traces what is in front of him: whether it is an empty and silent pastoral field, or a temple floor that radiates chaotic energy. Pieces of the city in which he grew up – Arani in Tiruvallur – thus spread out over Puviayarsu’s canvases, largely in black and white. During his very first personal exhibition entitled Petrichor, at the DakshinaChitra museum, 28 of these creations (sketches and paintings) are exhibited. Puviyarasu vividly remembers his first contact with art: at the age of eight, he accompanied parents as they strolled through the city making signs and banners. The little boy served the artists, cleaned their brushes and ran errands. When the banner art was digitized, it stopped.

“But I wanted to further this interest, somehow enrolling in Chennai College of Fine Arts. I didn’t even know the college until then,” he recalls. Under the tutelage of artist Illaiyaraja, he cracked the entrance – “it was the greatest achievement for me.” When he finds himself in the visual communication department, he is disappointed because he wants to specialize in painting. It was under the guidance of his elders that he later discovered his talent for recreating landscapes.

“After that, until my fourth year in college, I continued to paint landscapes,” says Puviyarasu. However, after his university studies in 2007, he left to go into cinema: as an assistant cameraman. “It didn’t last long. Next stop was the entertainment which was also short lived. I was not satisfied. Until he resumed painting. “I felt like everything I wanted to honestly express was in my work from the start. But leaving something so dear to me, I went in search of other pursuits,” he recalls. Returning to what he loved the most was a life-changing step for the artist. Speaking of his choice of medium and material, the artist says, “The monotonous always creates the greatest impact. In addition, a pen is easier to handle, I feel like I can express myself freely with a pen. A passing tap of a pen on paper is like a tap on my creative mind. Apart from that, a determining factor for his work is time: “Light plays a major role in my landscapes. I usually left at 6:30. My work stops practically at 11 o’clock. The afternoon, from 2:30 p.m. to 5:30 p.m., is a good window. It’s not often that he manages to finish a job in a day. He continues: “Sometimes it takes me a week to capture the ‘feel’ of the sight. So I keep going back. 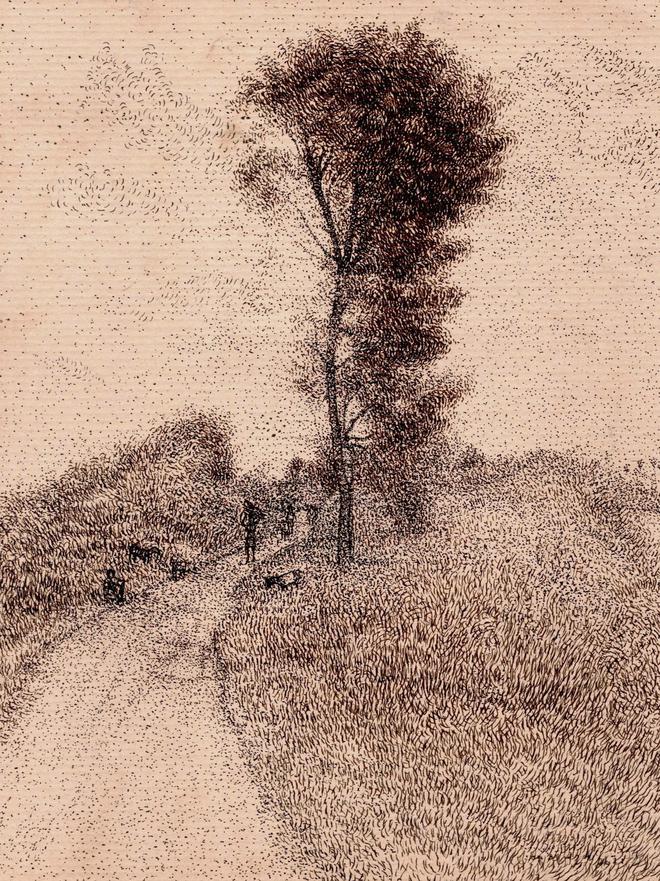 Now, while working as an art teacher at a nearby school, he makes sure to continue his personal practice. “I’m so happy to be able to live as an artist among those I grew up with. Every day when I walk around town, I learn more and more about life. I see new colors,” says Puviyarasu.