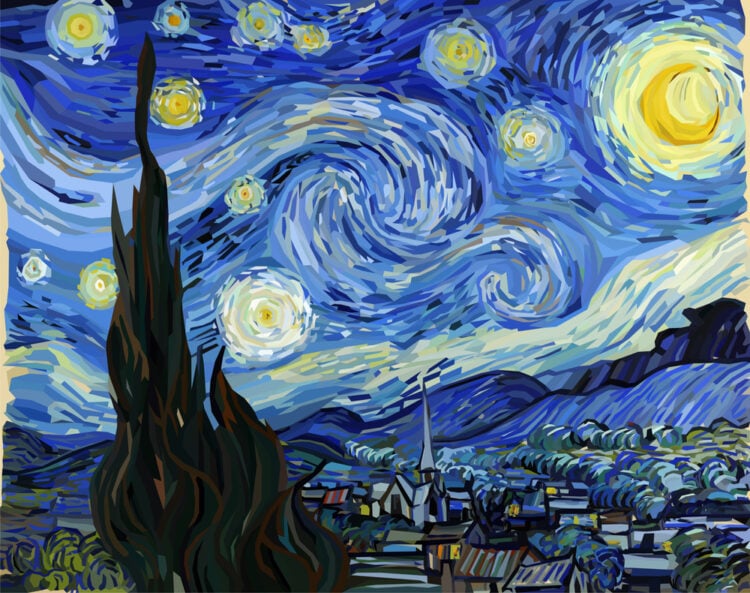 Vincent Van Gogh is one of the most iconic Dutch painters in history. His paintings have made a fortune at auctions around the world. He was from the small town of Groot Zundert in Holland. His birth followed the death of an older child to replace grieving parents. Van Gogh’s life was characterized by artistic genius and periodic mental breakdowns. Life did not turn out as he had planned. He suffered from physical ailments and a lack of success in his artistic productions during his lifetime. His art is filled with symbolism for the emotional truth he held, but the beauty and impact of his work would only be realized after his death. We feel the emotions of loneliness and disparity portrayed in his art. It makes you wonder if the struggling artist who only sold a few paintings during his lifetime would be satisfied with the fortunes they demand today? Here are the five most expensive Van Gogh paintings ever sold.

Irises is the fifth most expensive Van Gogh painting ever sold. Vincent painted this masterpiece as one of a series painted shortly before his death in 1890. It was completed at the Saint Paul de Mausole asylum where he was detained in Saint Rémy de Provence, in France. Van Gogh took a personal liking to irises and he painted several works featuring the beautiful flowers. It is widely believed that he was drawn to the flower for its healing properties and symbolism. Van Gogh had many ailments in his life and it seems only natural that he would turn to a symbol that offered hope. Van Gogh’s Irises was owned by collector Joan Whitney Payson until her son sold the painting. Alan Bond bought the painting on November 11, 1987 at Sotheby’s New York for $53.9 million, according to the New York Times.

The Portrait of Joseph Roulin is one of many paintings the artist made for the subject and his family. Vincent was known for his landscape paintings, but he was passionate about painting portraits. He shared his passion with others of his time who passed on the stories of his true passions through the ages. Joseph Roulin lived in Arles, where he was a postman to earn his living. The painting belonged to an anonymous private collector from Zurich, Switzerland. The sale agreement for the painting was made at a private sale at the Museum of Modern Art in New York on August 1, 1989.

A Wheat Field with Cypresses is one of Van Gogh’s most famous works. He painted it from the hospital in Arles, drawing inspiration from the view from the back window of his room. Van Gogh was allowed to take brief walks outside the asylum and to paint in the fresh air. The cypresses around the asylum moved him. He believed the tree reflected the things he felt inside, and he captured its essence in the painting. He loved the finished product and made three more. The wheat field with cypresses was sold by Emil’s son Georg Buhrle in May 1993. for 57 million dollars. Walter H. Annenberg bought it at a private sale. He bought the painting for the Metropolitan Museum of Art. This is where it is displayed, according to Trip Improver. He was painted at a time when he was undergoing a period of convalescence for his ailments.

Van Gogh’s Portrait of the Artist Without Beard, also known as Self-Portrait Without Beard, is a self-portrait that Van Gogh painted of himself, with a clean-shaven face. He painted the portrait in 1889 in oil on canvas. It is believed to be the last self-portrait painted by the artist, completed in September 1889. It is arguably one of Vincent Van Gogh’s most famous self-portraits. The last known sale of the painting was on November 19, 1998. It was sold at auction at Christi’s, New York, by the heirs of Jacques Koefer to an anonymous buyer for a price of $71.5 million. The Portrait of the Artist Bare Beard is Van Gogh’s third most expensive painting sold.

Widewalls confirms that post-impressionist artist Vincent Van Gogh’s most expensive painting is his Portrait of Dr. Gachet. To fully appreciate its meaning and value, one must know some things about its background. Dr. Gachet was Van Gogh’s last doctor. The doctor took care of him in the last years that Van Gogh lived on earth. Van Gogh created two versions of his famous portrait of Dr. Gachet. He made this version, and another on display, at the Musée d’Orsay, Paris, France. The last known sale of Van Gogh’s Portrait of Dr. Gachet took place on May 15, 1990, offered by the Siegried Kramarsky family. It sold at a Christie’s auction in New York at Ryoei Saito. The painting had previously sold for $75 million. It is one of the most remarkable paintings left by Van Gogh. It was pained in Saints Reimy, depicting the doctor with a melancholy expression. This tells us something about Van Gogh’s state of mind when he created the painting. The painting shows Gachet leaning on his arm at a table with a foxglove nearby, known to be a cure for heart disease at that time. Gachet is the doctor who declared Van Gogh dead after shooting himself. The Portrait of Dr. Gachet symbolizes suffering in the face of success in his profession. We will never know the artist’s true feelings about the painting.