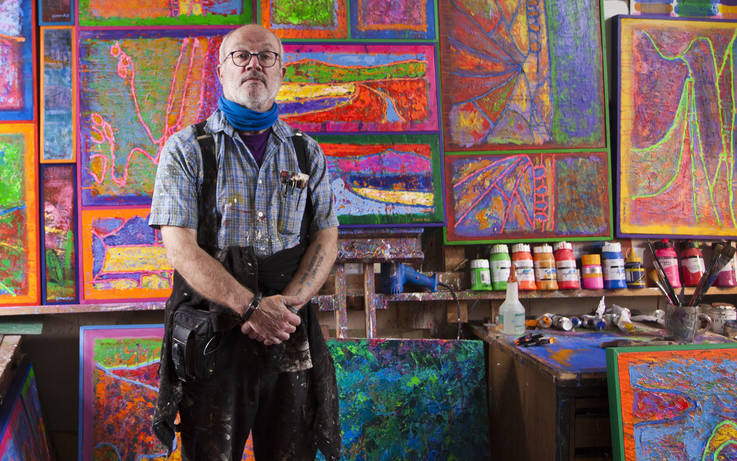 Simon Pell trained in fine art at Slade, London, becoming a stage painter at the National Theater and working on West End musicals including Cats, Les Misérables and Starlight Express. In 1987 he came to work for the Durham Theater Company and never returned to London. He became heavily involved with the fledgling Castle Players, creating his art policy of playing Shakespeare outdoors at the Bowes Museum and enjoying a spell as resident designer at the Gala Theater, Durham and the Georgian Theater Royal. .

When you were training, did you always intend to go to the theater?
No. But I started to work in the theater by a roundabout route. In 1974, when I was 16 and had just completed my O levels, I got a minor role in the Leicestershire County Youth Theater’s inaugural production, The Royal Hunt of the Sun, which toured through Berlin – then, of course, East Germany. .
It is thanks to this incredible experience which changed my life that I decided to be an actor.
However, at that time my best subject in school was art (my parents were both art teachers), so it seemed like the obvious next step for me.
So after my high school diploma I graduated in fine arts from the local Loughborough College of Art, after which I got my first professional theater job as an assistant stage painter at the Haymarket Theater in Leicester.
After working there for about a year – and chatting with several professional actors about their desperately precarious lives – and my own obvious lack of acting talent – I decided to pursue a career as a stage artist.
As a result, I moved to London in 1981 without any job. In no time, luckily, I got a full-time job at the National Theater as a stage artist for two years.
It was then that I decided I wanted to become a set designer and did a master’s degree at the Slade School of Fine Art in London.
During the two summer vacations I was at Slade, I worked as a theater company director for Theater Set-Up, which was one of the first professional theater companies in the country to play Shakespeare in full swing. air at the National Trust and similar properties.
It was a busy schedule and we traveled the depth and breadth of Britain.
I suddenly discovered that I liked Shakespeare when he was “performed”, not just “taught” in a boring classroom (a little seed was planted in my head).
When I graduated from Slade, I was almost destitute.
Fortunately, I found a job with the Durham Theater Company, based at the much-missed / lamented Darlington Arts Center through a six-month contact. At the end of the six months, I kind of forgot to go back to London.

Art is often seen as a solitary occupation – what is it like working as a team to produce sets?
This question hits the proverbial nail on the head for me – I couldn’t (until the recent Covid-19 lockdown) endure the loneliness of the proverbial ‘artist’s garret’ with all its impoverishment and creative uncertainty and pressure . .
The good thing about working in the theater is that it’s all about creative teamwork – it means working and socializing with people from all walks of life and all ages. There is nothing remote sociable about being a lonely artist. But when the lockdown started – there was no theatrical work available for me, and I was put on leave from Middlesbrough College, where I teach performing trades part-time – I found myself in spending an inordinate amount of time in my home studio painting pictures again.

After moving north for six months initially, what held you back here?
In two simple words – Barnard Castle.
I had never lived in a postcard before, and I was amazed by the beauty and charm of the city and the friendliness of the natives (northerners are much friendlier than southerners, I find) when I discovered it for the first time.
The great thing for me, among many things, about Barney is that he is at the heart of some of the best (and most highly paintable) largely (thankfully) undiscovered scenery in the country.

What are the differences in the design of the sets of the provincial theaters compared to the West End?
The simple answer to this question is simple: money.
You can (or could before Covid-19 hit) make a lot more money working in the West End than in the provinces. When I left the National Theater to become a freelance stage painter, I worked on several great musicals that arose in the early 1980s. The biggest of these was Les Misérables; but I’ve also worked on Cats, Starlight Express, Phantom Of The Opera and others – all earning (in my humble opinion) a lot of money.
The most memorable and financially rewarding moment was a day of repainting the set for Tell Me On A Sunday, an Andrew Lloyd-Webber musical with great lyrics by Don Black.
While I was painting, Sir Andrew was on stage hovering over his piano with his (then) wife Sarah Brightman singing with all his heart. I will never forget this experience.
Those few Sunday hours paid me the princely sum of £ 850 (which is more than what I am making now – 40 years later – in a whole month).

How did you get involved with the Castle Players?
Via Hélène Brown. When I arrived to work for the Durham Theater Company, Helen was their administrator; and had recently formed CP in a legendary blackout, followed by an impromptu game of charades, at The Old Well in Barney. It was Helen who first introduced me to the Bowes Museum, who when I first saw it really blew my socks off.
At the time, the instant question in my mind was (given my recent experience on Shakespeare’s summer tour) “Wouldn’t this be the perfect location for an outdoor production of A Night’s Dream?” summer”.
This ambitious promenade production was made and performed during the mid-summer week of June 1989 – 20 summer productions and 15 winter productions followed.

Why the return to painting after such a long interval?
The Covid-19 containment was the perfect opportunity (with nothing else to do for six months) to resume painting pictures after a ten-year fallow period.

Did the transition go smoothly or did you have to work hard enough?
I found it surprisingly easy, and working from home (and not spending two hours a day in a car) had some nice benefits.

How would you describe your style?
To say that my paintings are colorful is an understatement. I call them my kettle paintings – some people love them and some hate them – there are no half measures.

Given the events of 2020, can you say for sure what the future may hold for us?
I will be going back to Middlesbrough College next month at some point. I am a theater technician from the college and I also teach scenography and painting by working on real student productions.
The future of professional theater is very bleak, especially for freelancers like me.

Where can people find out more about your paintings?
I have a solo show at The Witham in February of next year, and I recently joined Teesdale Artist’s Network (TAN).
I am also in the process of posting pictures of my new work on my Facebook page.