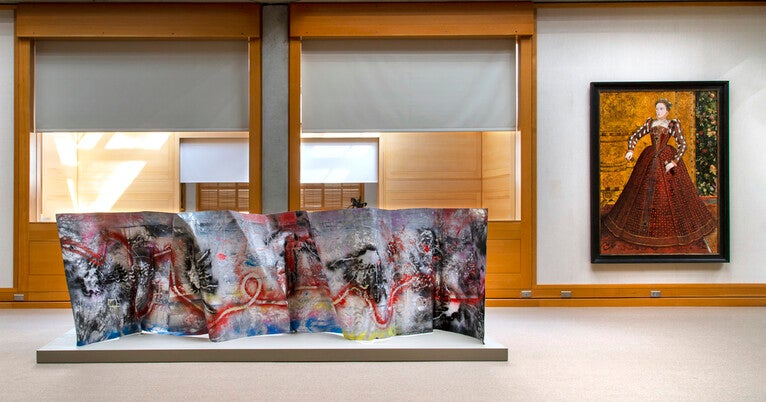 The YCBA exhibition gives a contemporary twist to “history” paintings

A young woman stands defiantly as two police officers in body armor and riot helmets attempt to arrest her. They approach her and yet seem to move away, as if her poise pushes them away.

“She’s so self-possessed,” Quinn said. “She’s so responsible for herself, her purpose and her destiny.”

The artist has purchased the rights to the image and recreated it as a photorealistic modern history painting, part of a series he has done that subverts the tropes of 18e-century history paintings, an artistic genre that often glorified empire and aristocracy.

Evans’ painting joins five other works by Quinn in “Marc Quinn: History Painting+”, a new exhibition at the Yale Center for British Art (YCBA) on view until October 16. The exhibition juxtaposes four of Quinn’s history paintings with works by JMW Turner, Joshua Reynolds, Thomas Gainsborough and other luminaries of British art represented in the museum’s fourth-floor galleries, offering new perspectives on the YCBA historical collections. It also features two sculptures of Quinn, one of which is made from the artist’s own frozen blood.

“Marc Quinn offers a contemporary commentary on British artistic traditions, such as landscape and history painting, which are well represented in the museum’s collection,” said Courtney J. Martin, director Paul Mellon of the Yale Center for British Art. . “In dialogue with paintings and sculptures from the 18th and 19th centuries, his work directly engages our historical collections, offering new perspectives on these works and expanding the understanding of our collection for a wider audience.

The exhibit begins in the museum’s entrance courtyard where visitors will experience “Self 1991”, a self-portrait bust that Quinn made by freezing 10 pints of his blood – roughly the amount circulating in the body of a adult – in a cast of his head. Quinn discussed the sculpture and other works on display at a recent conference at the YCBA with Martina Droth, deputy director and chief curator of the museum, who curated the exhibit.

The sculpture, which must be continuously refrigerated to maintain its shape, comments on both the fragility of human life and the restorative qualities of the body, Quinn said, noting that our blood supplies are continually replenished.

“I like things that seem like one thing and are the opposite,” he said. “Then you have this sculpture that looks quite bloody, like a decapitated head, but it’s actually about the incredible power of the body to rejuvenate itself.”

The blood contains data on Quinn’s genetic makeup, ancestry and health, forming a kind of “biological library” about her, he noted. He has produced a new bust in the same way every five years since making the initial sculpture in 1991.

The show continues on the fourth floor, where, just beyond the elevators, visitors will discover “Thames River Water Atlas”, a sculpture reflecting the famous river and the invisible infrastructure that circulates water (and sewage) in London. A departure from the romanticism of JMW Turner’s beloved seascapes, the sculpture reinvents landscape painting in a time of climate change and environmental degradation, Quinn explained, creating a sense of “Turner in the age of the apocalypse”.

The canvas of the sculpture bears the imprints of manhole covers and trash made right on the streets of the city. It is affixed to an aluminum support, which is folded in the shape of an accordion and can fold up to form an artist’s book. The river, outlined in red paint, meanders through the folds of the sculpture.

“I wanted it to be almost like a found object dropped from the back of a truck or the side panel of a building,” Quinn said.

The artist began creating his “History Painting” series in 2011 against the backdrop of protests and unrest across the world in which people attempted to overhaul the social order from the bottom up.

“I thought it might be quite interesting to take these images of what is happening now and turn them into history paintings,” he said, noting that the history paintings of the masters ancients tend to celebrate a stratified society in which monarchs and aristocrats wielded power from the top down. Quinn’s works subvert this notion of social control, he explained.

The four paintings are photorealistic representations of topical photographs that depict individuals engaged in revolutionary acts or, like Evans, opposing injustice. From a distance, each appears like a photograph, but close examination reveals Quinn’s brushstrokes.

“I think it’s actually very powerful that you can clearly see that they’re based on photographs, but they’re so painstakingly recreated in paint and so they enter a very different time space,” Droth noted.

Once he had completed each painting, a process that could take him several months, he would throw leftover paint onto the canvases with a palette knife. The chaotic streaks and spots “activate” the paintings, he said, infusing them with energy.

One of the paintings captures X González, a survivor of the 2018 mass shooting at Marjory Stoneman Douglas High School in Parkland, Florida, as they deliver a poignant speech demanding change just days after the massacre. The painting added resonance in the wake of another school shooting, which claimed the lives of 19 elementary school students and two teachers in Uvalde, Texas.

“History Painting (London, 8 August 2011) ROYBWN’ shows an unidentified masked protester halfway against a backdrop of flames during an uprising sparked by the police shooting of 29-year-old black man Mark Duggan at Tottenham , London. Quinn’s rendition of the image hangs opposite a 1782 portrait of Charles Stanhope, the third Earl of Harrington by Joshua Reynolds, highlighting the contrasts between Old Master paintings and Quinn’s works.

In Reynolds’ painting, an idealized Stanhope stands clad in armor with his sword drawn and pointed downward. A column of black smoke rises in the background from a nearby battlefield. Marcus Richard Fitzroy Thomas, a young black man who may have been attached to the earl’s regiment in Jamaica or enslaved on a plantation in the British colony, accompanies the young military officer. Stanhope likely brought Thomas back to Britain with him as an attendant, according to museum etiquette.

Quinn’s nearly life-size depiction of Evans confronting the police is made up of four panels that don’t precisely line up with each other, creating a sense that the event is happening in time, Droth said.

A fourth painting documents a scene of anti-government unrest that erupted in Kyiv in 2014 after then Ukrainian President Viktor Yanukovych refused to sign an Association Agreement with the European Union, opting instead to forge ties closer to Russia. The image, painted on three panels, of flames and coal-black smoke surround two protesters. One crouches while the other throws an object at an invisible enemy.

“There’s a lot of energy in this painting,” Droth said, speaking to Quinn. “The paint you threw on it seems to echo the movements, the projected action, of the protester.”

Quinn noted that the 2014 clashes were a prelude to Vladimir Putin’s decision in February to invade Ukraine and the ongoing war there.

“It’s amazing how historical events come to the fore, then they go to the background, and then they come back to the fore,” he said.

The Yale Center for British Art is open Tuesday through Saturday from 10 a.m. to 5 p.m. and Sunday from noon to 5 p.m. on the museum website.